The Shanti Kai™ 2016 New Years Kit has arrived… Just in time to save you from the Mercury Retrograde, the challenges of Pluto, and the complications of the New Moon! 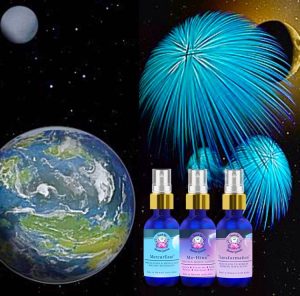 That’s right… The New Year is here and the Universe is already throwing us a doozy… January’s Capricorn New Moon occurs on Saturday, 1/9 (or Sunday, 1/10) and initiates an intense start to the New Year. 2016’s first New Moon is coupled with the Sun (in Capicorn) and Pluto (unconscious/evolution) opposing Uranus (freedom/revolution). This dynamic celestial line-up places heavy emphasis on turning inward, identifying worn-out behaviors/beliefs, and releasing them for the purpose of showing up in the New Year as your most authentic/expanded self.

Capricorn’s sure-footedness, self-discipline, and perseverance are there to support your ambitions as well as your discernment and transformation, but a Mercury Retrograde (1/5 – 1/25) may serve to muddle communications. So remember to stop and check that your ducks are all in a row before signing any contracts, and be aware that these tensions/energies are likely to play out on the world stage as well. This is a relatively short-lived transition, but a potent one, so self-care is strongly suggested: good sleep, food, and quiet time, along with Shanti Kai’s Transformation™ essence to assist in working with Pluto, Intuition™ for working with the Moon, and Mercurease™ essence to help avoid communication snafus.

About the Author: Shanti Kai